How is the UK “Coronavirus Lockdown“ Changing Road Safety

Since the Government’s decision to restrict movements on the 23rd of March 2020, there has unsurprisingly been a large drop in vehicle movements on the road network. The Government’s daily briefings often include traffic figures provided by Department for Transport that show the lockdown is being observed widely across the UK. Of course, key workers are still travelling, and others are still able to travel for essential purposes. At Agilysis we work with a large number of local authorities, analysing road safety data, including collisions and traffic profiles, which means we are in a fantastic position to be able to review what’s happening on the road network. At the end of March, I started looking at data for one particular local authority (a largely urban area in the South East of England) and was initially interested in traffic flows. The evidence shows that the national traffic reduction is reflected well in the local results I have analysed. In addition, I was also able to analyse in more detail vehicle class, as well as weekend versus weekday flows.
compared to the first two weeks in March (02/03 – 15/03). As you may expect, the traffic mix on roads has changed slightly with a greater reduction in the number of cars (from 92% of traffic down to 87%), and a slight increase in the proportion of goods vehicles as they continue to deliver essential goods to our shops. Weekend traffic is significantly suppressed compared to pre lockdown figures, although there have been some spikes in motorcycle traffic which don’t fit patterns seen for other modes.
The next thing I wanted to review was any change in vehicle speeds and how they related to change in traffic. Perhaps unsurprisingly there was an increase in average speed as traffic flow reduced. This could just have been the impact of reduced congestion, although changes in 85th percentile speeds also increased meaning that motorists are choosing to travel at speeds above the posted speed limit. As the data through April has been made available it is showing very consistent changes, as average and 85th percentile speeds remain much higher than they were pre lockdown. 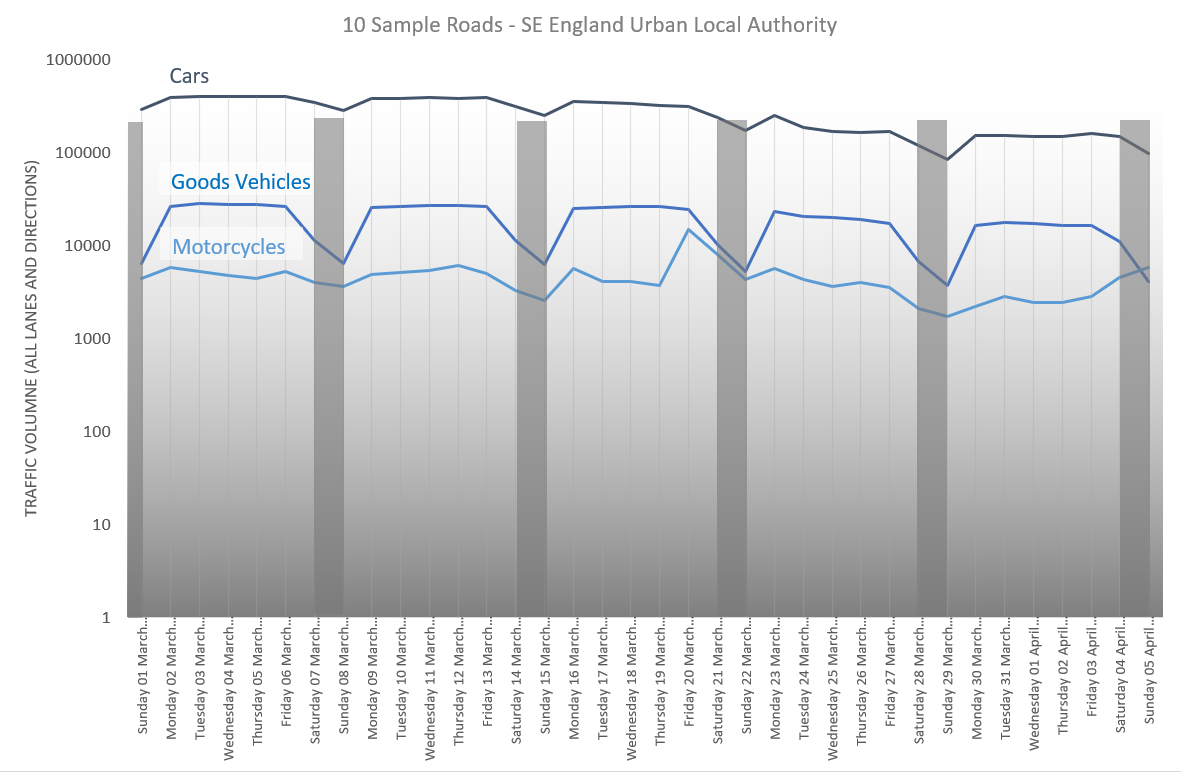 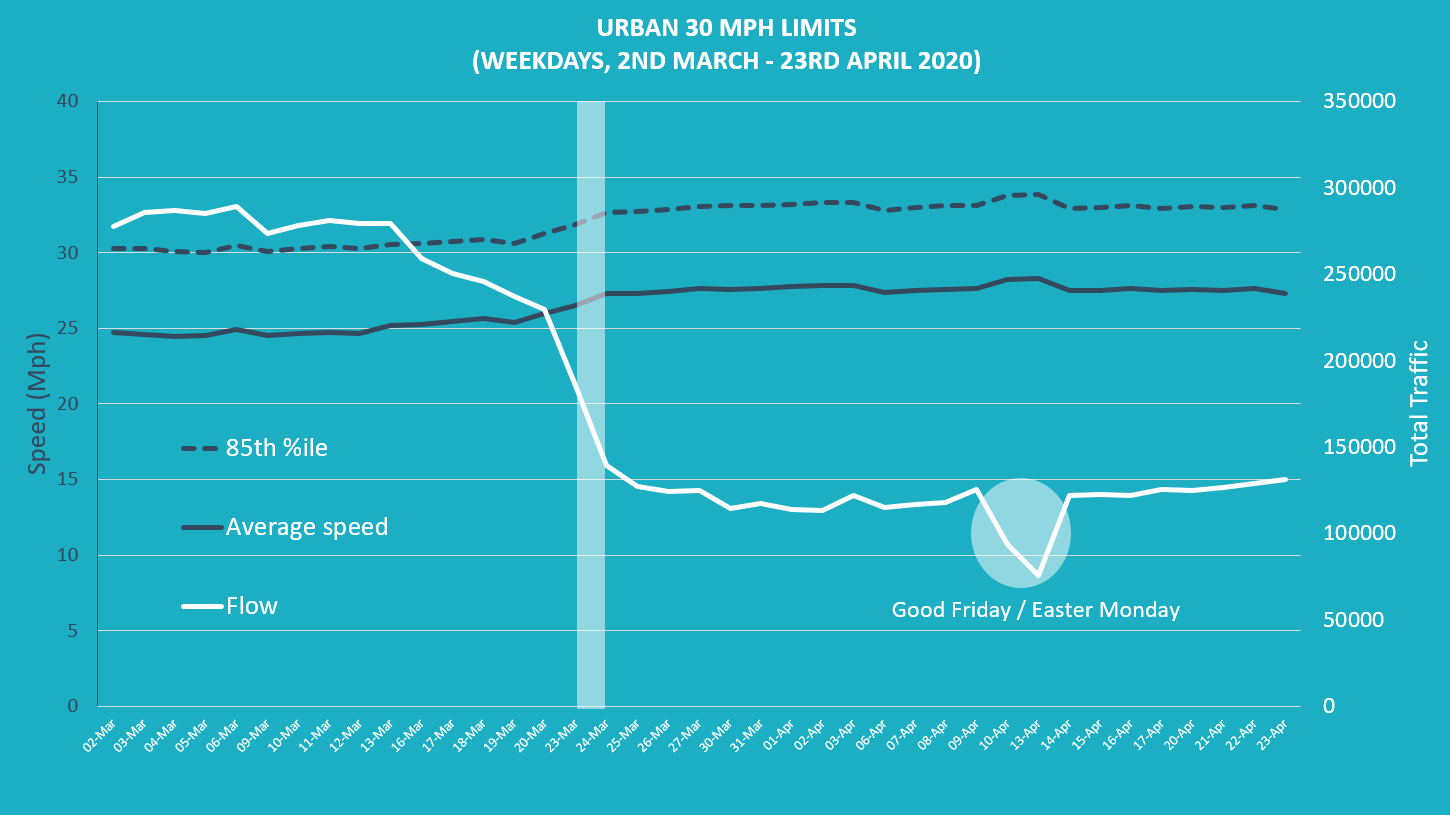 During this period of lockdown there have been a number of reports of very high vehicle speeds, notably from the Metropolitan Police. My next task was to have a look at those travelling well in excess of the speed limit. I chose to analyse those travelling at 15 mph above the speed limit so those travelling at 45 in a 30 for example. There are two measures I could look at here. Firstly, the percentage of vehicles travelling at these speeds, and secondly the absolute number of vehicles travelling at these speeds. As you would expect with a general increase of average speed, the percentage of vehicles moving into this high speed band has increased. Typically, pre-lockdown on the roads I analysed we were seeing around 0 .6% of vehicles in this band. Immediately after lockdown this leapt to 1.5% and has remained close to 2%, and sometimes as high as 2.5% on the Easter Bank Holidays. The absolute number of vehicles travelling at these speeds has remained the same and perhaps even increased a little. This leads to some interesting questions about who it is that is choosing to travel at these speeds. Are they the same people that were travelling at high speeds before lockdown, and are still using the road network, or are we seeing other drivers who would not normally have travelled at such excessive speeds now travelling even faster now the opportunity is available?
There are other questions about why people feel they are able to do this. Is it because those using the roads now are less risk averse and are more willing to travel at high speeds, or are people speeding because they think that the chances of detection are lower as the police concentrate on other duties? There has been concern amongst some within the road safety sector that police enforcement resources may not be being deployed during this period of lockdown. It is entirely understandable why those directing resources would not want to be being seen to be undertaking non-essential services and enforcement hasn’t always been popular. I would argue, however, that traffic enforcement is essential, especially at a time when we see there are increasing vehicle speeds coupled with greater numbers of pedestrians and cyclists using the road network. Although this study only looked at a small number of urban roads in 30 mph limits there are similar studies being undertaken by fellow road safety analysts around the country, often looking at rural roads. I have been lucky enough to see data for a sample national speed limit single carriageway road that demonstrate very similar changes in speed choice. This road previously had traffic flows between 10,000 and 12,000 per day and typically only saw around half a percent of motorists exceeding the speed limit. Now traffic flows have reduced to around 4,000 to 5,000 per day, the percentage of people exceeding the limit now ranges between 5 and 8% post lockdown. There is an opportunity for collaboration between authorities who hold this information to enable us to understand what is happening on the roads now, and to inform future enforcement strategies. I will be seeking to work with fellow road safety experts around the country to produce a paper in May which tries to understand what's happening in more depth and in more areas of the country. 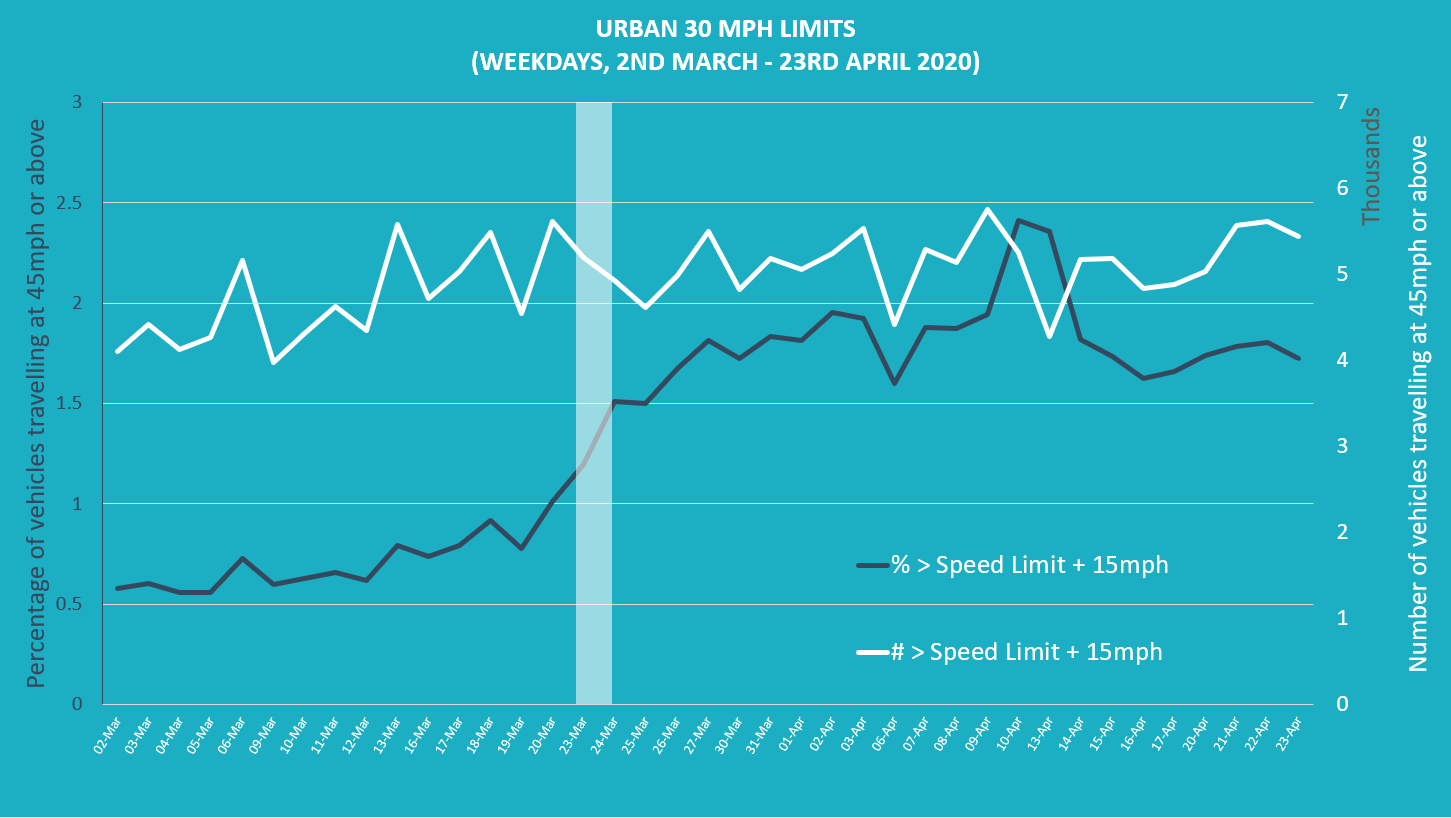